Words and Pictures by Isaac Fast

Walking down the cobblestone streets of Antigua Guatemala, it’s plain to see why people fall in love so easily with the colonial little town. Between preserved ruins of cathedrals built centuries ago, enormous surrounding volcanoes that occasionally dust the area with ash, a strong local Mayan identity, and a unique modern flare, Antigua is a truly unique little town.

Antigua is nestled in the valley created by three massive volcanoes, called Agua, Acatenango, and Fuego. The three volcanoes tower of Antigua like giants, and Agua can be spotted from just about any place in town.

Fuego is a highly active volcano that, when spotted at night, can often be seen glowing red. Why? No worries, it’s just spewing lava. A quick trip to the rooftop of many restaurants or coffee shops in town provide a view that cannot be forgotten, especially as the evening exposes the occasional red lava glow.

One of the most mountaintop experiences to have around Antigua is a hike to Fuego‘s sister volcano, Acatenango, which peaks at 13,000 feet. But that’s no walk in the park! Hikers who make the 6-hour ascent get an up close and personal experience with the nearby active Fuego volcano. After camping at the top of Acatenango, hikers say they’ve never been more thrilled to lose sleep to Fuego‘s nearly constant thunderous explosions.

Antigua’s climate is more than pleasing. Dry season spans from November through March, and wet season from April through October. But no matter the time of year, highs almost always hang around 75 fahrenheit, and it rarely rains for more than a couple hours. Unlike Guatemala’s tropical locations, Antigua doesn’t have any pestering bugs. Truly a paradise!

Antigua is a well-preserved colonial city and Guatemala’s most visited tourist destination. Upon arriving, traffic slows down for the bumpy 16th-century cobblestone streets.

The city only consists of about 10 square blocks, but they are packed with boutique hotels, hip restaurants, jade jewelers, and ruins of ancient cathedrals. Antigua’s buildings, which run right into the next one, create a mosaic of red, orange, yellow, and white.

Because of its allure, tourists have flocked to Antigua. Its city blocks are no longer filled with homes like they once were. Hotels, restaurants, clubs, shopping, and tourism in general has occupied the places that were once residences. However, all is not lost to tourism!

In recent years, Antigua has adopted a law that actually requires the entire city to follow a colonial building code. For example, business signage must be small and subtle. It has made waves in preserving the original Spanish colonial feel of the city, even if half of its pedestrians are tourists.

Although a large part of the Mayan identity was lost to a decades-long civil war, 40% of Guatemala’s population still identifies as Mayan and speaks one (or more) of 21 indigenous languages. Antigua is home of the Kaqchikel ethnic group. For many Kaqchikels around Antigua, Spanish is a second language, mostly spoken in school and when doing business. As you walk deeper into Antigua’s seemingly endless local market, it doesn’t take long until you hear the intense consonant sounds of a conversation in Kaqchikel.

Perhaps the most famous Mayan product is the ornate traditional fabric. Weaving by hand runs deep in the Mayan tradition. It requires preparing cotton, extracting dyes from native plants, and finally weaving threads into ornate skirts and dresses. The resulting products are beautiful, and the colors used in the fabrics often represent the weaver’s origin.

Although Antigua and its surrounding towns have a strong traditional Mayan identity, Antigua is one of Guatemala’s most hip and modern places. Hole-in-the-wall coffee shops and local health food stores carefully create their trendy ambiance to keep the colonial roots while mixing in a modern flare.

The result is an irresistable homemade fusion of tradition and modernity that can only be found in Antigua. At night, countless bars and dance clubs fill up and ignite the streets with pounding reggaeton and Latin hit music.

There is no lack of things to do around Antigua. Tours are available to suit any interest. Coffee- or chocolate-making tours, traditional Mayan weaving tours, and volcano-hiking tours abound. One can even schedule a helicopter tour of the little town! But simply walking around and discovering tiny crepe restaurants, artisan markets, and cultural centers can entertain for days. 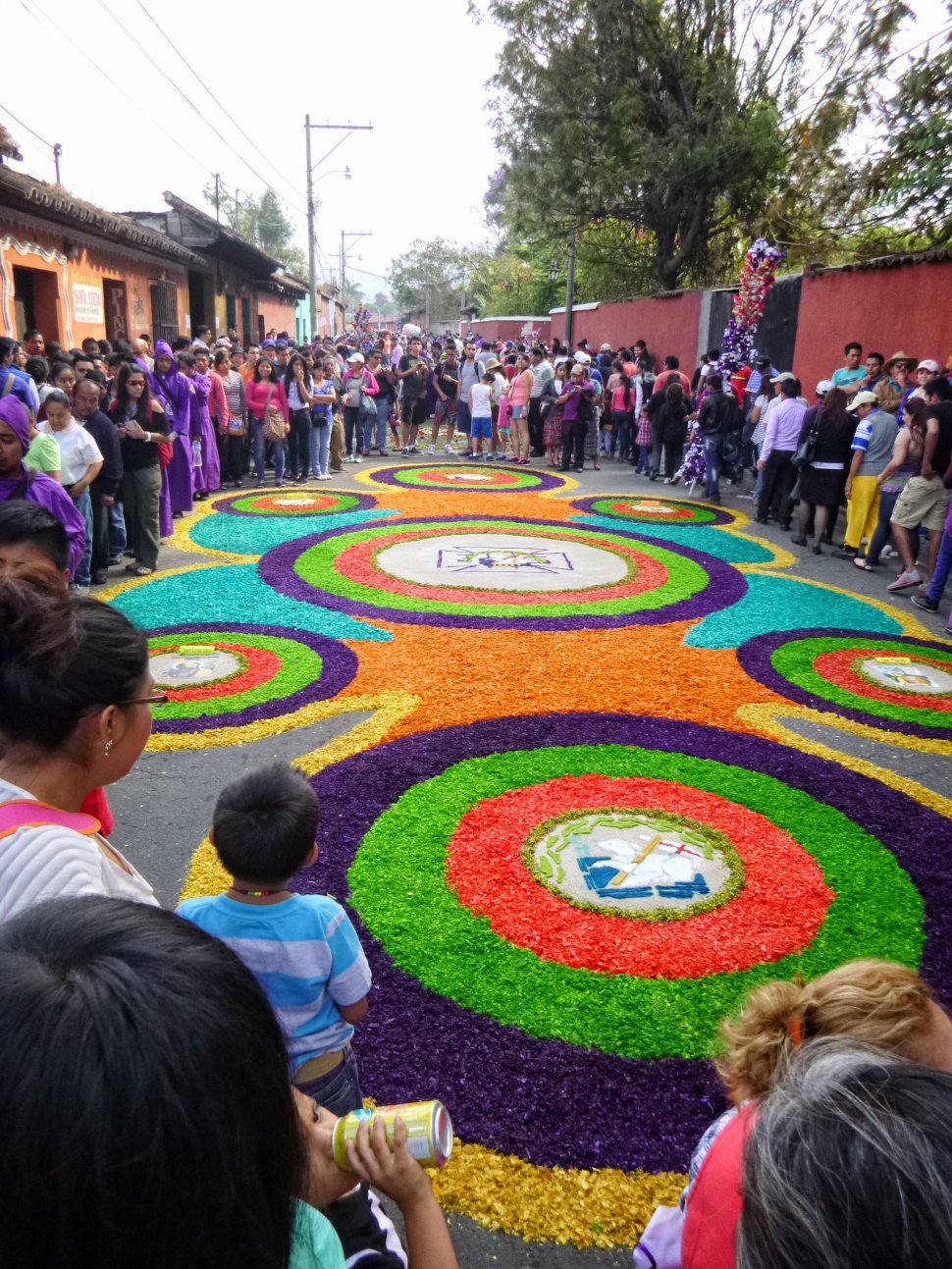 Antigua Guatemala truly is a unique destination. From its historic ruins to its modern bars, the little town appeals to all kinds of people. Get to know how warm and friendly the local people are, and you’ll see why so many people decide to stay.