On rare occasions, I have found myself inexplicably drawn to a place, and for reasons outside of my conscious mind unable to quiet the intense pull toward it. Iceland was one of those places.

I knew very little about Iceland before arriving, except that its capital city is Reykjavik (and that I wasn’t one hundred percent confident in my pronunciation of Reykjavik). I was also surprised to learn that a nonstop flight from Chicago to Reykjavik was a mere six hours.

Iceland seemed very much like the final frontier, a remote land that should take planes, trains, and automobiles to get to. But, fortunately for the adventurous, Iceland’s tourism has exploded in recent years, making it easier than ever to explore the far reaches of the Earth. In fact, the country can hardly keep up with its newfound tourism demands.

Iceland is known as “the land of fire and ice,” a country of stark contrasts. There is no word in the English language to describe the crispness of the clean air or the magnificence of its majestic beauty (or, the fetid stench of its national dish, Hakarl–fermented, rotten shark).

Landing at Keflavik International Airport is not like landing at other international airports. For one, the airport is tiny. We exited the plane directly onto the tarmac and got our first taste of the biting wind that whips over the country. At 6:30 am in October, the sun was just rising over the jagged, alien terrain. The summertime brings Midnight Sun and winter brings near-constant darkness, but spring and fall days provide punctual sunrises and sunsets.

The sun was peacefully rising when we entered the rental car location, but quickly the weather turned. Heavy rain and large hailstones pounded against the corrugated steel roof just long enough to make their statement, and then just as easily, the storm blew out. Icelanders say about the unpredictable bouts of sideways rain and gale-force winds: “if you don’t like the weather, wait 10 minutes.”

Once we had gotten our car assignment (paying extra for an automatic, as most cars in Iceland are manual transmission), my husband and I set out to celebrate our one-year anniversary circling the country of Iceland in 10 days by way of the Ring Road.

The crowning glory of Iceland is its adventurous spirit. Driving from Point A to Point B is never dull–at its “worst,” you’ll see horses, sheep, and rainbows. Below is a collection of our favorite points of interest and activities that we stumbled upon during our trip.

Reykjavik is the largest city in Iceland, and close to half of the country’s population of 323,000 lives there. As the most populated city and the most highly trafficked by tourists, there are many tours available near the Reykjavik area. We opted for a horseback riding tour over lava fields.

Years of volcanic activity has left much of the island covered in lava fields. The autumn foliage provided the most idyllic backdrop for the moss-covered fields, and the stables provided rain gear for the notoriously unpredictable weather. Animal lovers will feel right at home in Iceland, where horses and sheep dot the countryside, vastly outnumbering the country’s people, and cats roam the streets of Reykjavik looking for a human companion’s lap to curl up on. 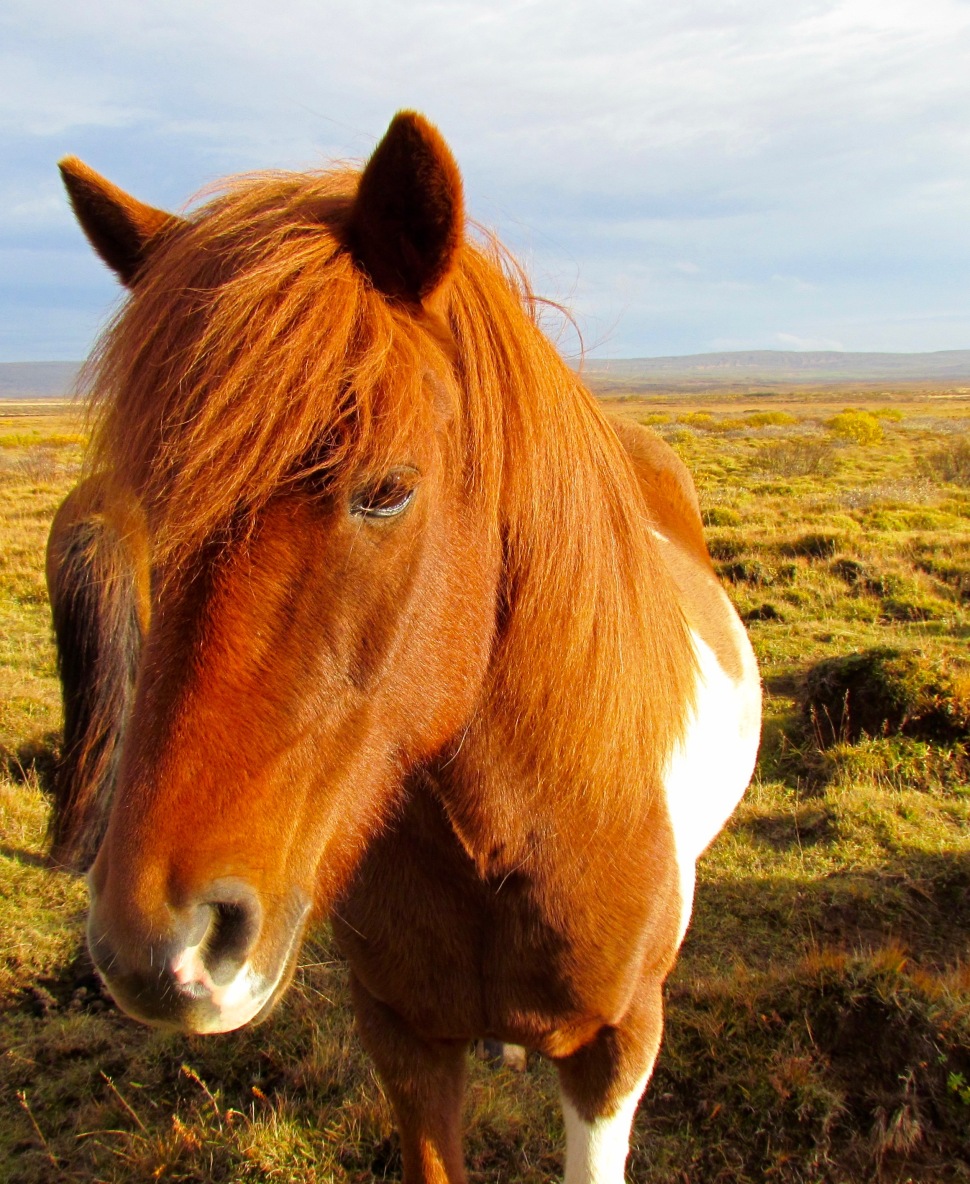 A popular driving tour just outside of Reykjavik is the Golden Circle–a 4-6 hour loop from Reykjavik and back that boasts such sights as Gullfoss Waterfall, the largest waterfall in Europe, and Geysir Field. Geysir Field is a geothermal field named for the now-dormant Geysir, the first geyser known to modern Europeans.

Though Geysir is dormant, Stokkur, one of the other geysers in Geysir Field, erupts every 6-10 minutes. By far the first thing you’ll notice, though, is that the geothermal field is quite stinky, the noxious fumes being caused by the hydrogen sulfide gas that the hot springs release.

Visitors are urged to stand back to avoid the hot spray, as the boiling hot eruptions can cause pain, burns, and even disfigurement. Signs warn of the dangers of the hot springs, notifying visitors that the nearest hospital is 62 kilometers (38.5 miles) away. Enter at your own risk!

Iceland is known for its stunning landscapes, but what’s a weary traveller to do on the rainiest of days? Luckily, Reykjavik is home to one of the stranger museum exhibits–a collection of mammalian penises. We try to seek out eclectic museums when we travel, so we’re no strangers to odd subject matter, but this one might have been our weirdest yet!

Sigurður Hjartarson is the founder of the museum, having started his collection as a young child. Various techniques of preservation are employed throughout the museum, including formaldehyde, drying, stuffing, and pickling. The search for a human specimen to complete the mammalian collection is documented in the film The Final Member.

Humorous art pieces are scattered throughout the exhibits, and quite an array of interesting items can be purchased in the gift shop. For lovers of the bizarre, this museum is a must.

The Snaefellsnes Peninsula is home to the Snaefellsjokull glacier. The peninsula has much to offer, including stunning sights of the glacier, as well as caves and craters to explore. The peninsula has a few towns, but by and large–like much of the rest of Iceland–it is vast and empty, giving it a bit of an eerie feel. The night we drove in, the area was covered in a dense fog.

It turns out, we didn’t imagine the eeriness. Iceland is a peaceful country with a very low crime rate, however, the Snaefellsnes Peninsula is the final resting place of Iceland’s most notorious serial killer, Axlar-Bjorn.

The merciless killer was born in the 16th century and admitted to killing 9 victims, but likely killed many more. He named his wife as his accomplice, and both were sentenced to death. As she was pregnant at the time of her sentencing, her execution was postponed–and no definitive records indicate that she was executed after all.

Axlar-Bjorn’s death, however, was quite gruesome, and his body parts are buried throughout the Snaefellsnes Peninsula in three different places to prevent any superstitious possibility that he could come back to life.

Strandagaldur, the Museum of Icelandic Sorcery and Witchcraft

The Westfjords are also known for their eeriness, and have a history steeped in witchcraft. This couldn’t be more clear than in the sleepy town of Holmavik, home to Strandagaldur, the Museum of Icelandic Sorcery and Witchcraft. The museum offers self-guided tour documents in various languages, and visitors can explore the two floors of the museum on their own and end their stay with a quick bite in the cafe (if you haven’t lose your appetite, that is).

The museum is filled with oddities and nightmarish lore about the various witch executions and spells that have been used over the years. Nothing is creepier, though, than the “necropants” displayed in a glass case on the wall–skin leggings made from a man’s lower half that were used in a spell to bring fortune to the spell’s caster.

Iceland provides many opportunities for whale watching. Reykjavik, Husavik, and Olafsvik are popular ports of departure, however, we chose Akureyri (in northern Iceland) for our whale watching excursion. There are about 20 different species of whale that can be seen in Icelandic waters, but some of the most popular (dependent on time of year) are minke, humpback, sperm, and harbour porpoises.

Humpback whales typically travel independently, but we had the exciting and rare chance to see a group of them swimming and feeding together. As first-time whale watchers, it was an awe-inspiring moment for us to be so close to such large, graceful creatures.

The most endearing thing about seeing these gentle giants was how curious they were about us. They didn’t seem fearful of the boat or the humans aboard it–in fact, they seemed more interested in us than even we were in them. They put on an elegant show for us, and though we were cold, we exited the boat feeling grateful for such a moving experience.

Right outside of Lake Myvatn on our way to the very remote eastern edges of Iceland, we came upon an unexpected geothermal field. This one was different from Geysir Field–instead of hot springs, it was filled with geothermal vents. We could smell the sulfur far before we could see the field, and once out of the car, we could hear the vents audibly hissing.

We were greeted by this sign, a nice reminder to tread lightly and to cause as little damage as possible while exploring this fascinating region. 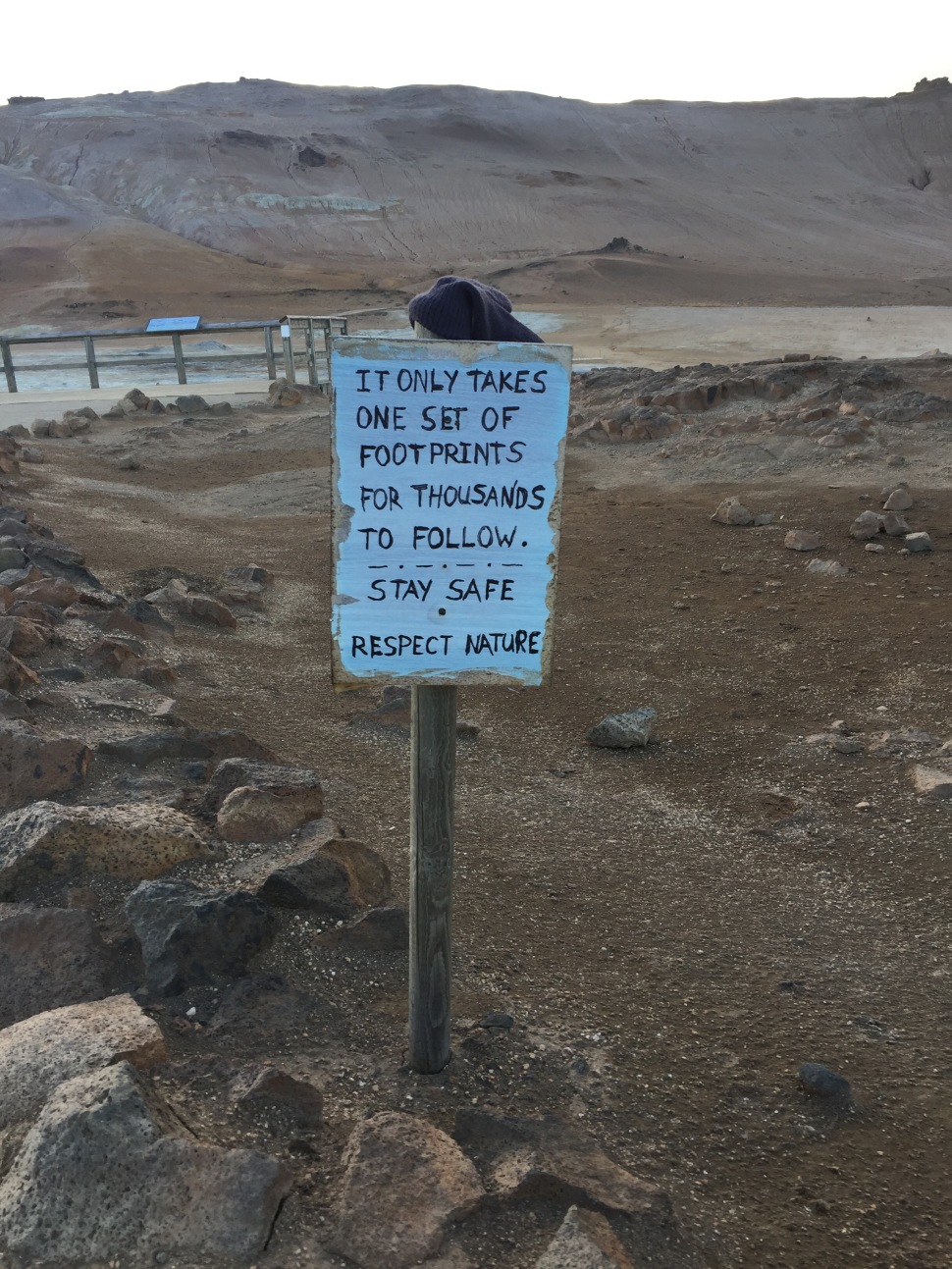 It was unlike anything we had seen before–smoke spitting and mud boiling in cauldrons carved from the Earth. If ever we felt like we’d somehow crossed an imaginary boundary into another world, this was definitely it.

The landscape was barren and desert-like, again a sharp contrast from the waterfalls and rocky cliffs we’d seen so much of thus far. Once again, Iceland surprised and delighted us, revealing myriad landscapes and biomes, each with its own secrets to be unlocked and uncovered. In Iceland, Mother Nature’s imagination knows no bounds. 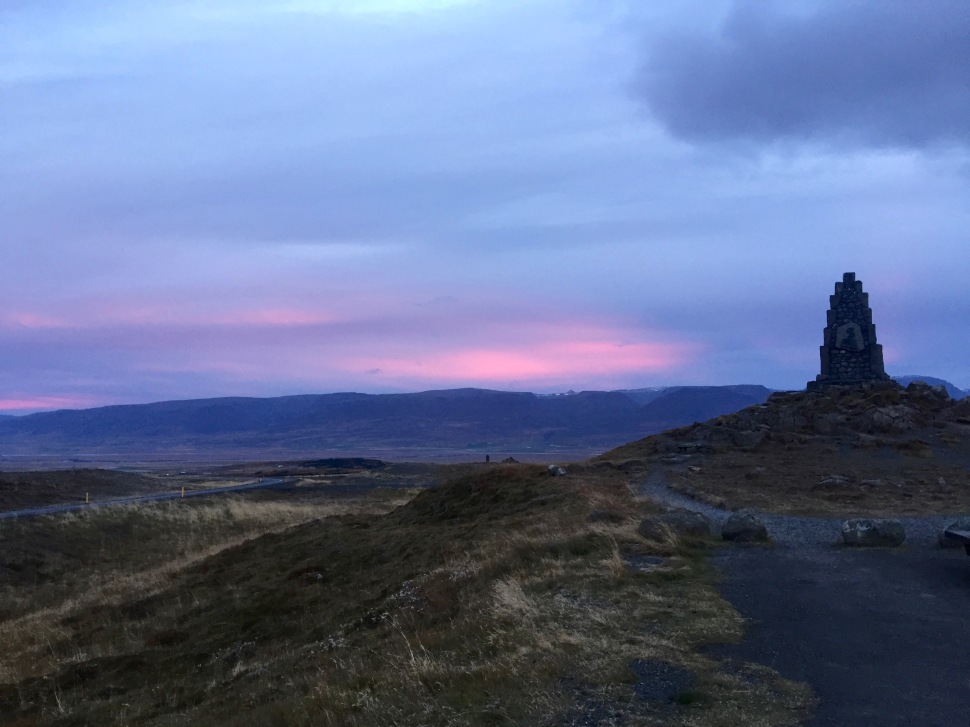 Keep in mind that in order to explore the highlands (the interior of the island), you will need to rent a 4×4 vehicle; 4x4s are necessary on all “F” roads. We rented an economy-sized passenger car and got around just fine on the Ring Road.

The national language is Icelandic, but most everyone speaks multiple languages, including English. The currency is Icelandic Krona, and compared to the U.S., food is quite a bit more expensive (largely because so much of it is imported due to Iceland’s climate). It is not customary to tip at restaurants.

We also learned the hard way that foreign credit cards are hit or miss at the Reykjavik parking meters–so plan on carrying a little bit of cash!

In the more remote areas outside of Reykjavik, where accommodations can be harder to find, IcelandAir has its own chain of hotels.

Alcoholic beverages are only sold at Vinbudin, Iceland’s very own liquor store. You cannot purchase alcohol at grocery stores, gas stations, or anywhere else you’d typically see it available in the states.

And lastly, don’t rely too much on your GPS. Most locals will give addresses based on landmarks (“Turn left after the farm, follow the road past the three mailboxes…”) rather than street numbers.

There is no shortage of stunning sights in Iceland, and take my word for it–10 days is not nearly enough to soak up all that Iceland has to offer.