Leaves don’t crinkle beneath your feet here, they squish and slide.

Quintessential, Dutch, rainy days soak you while biking – and if you’re not careful the blanket of slippery leaves will knock you on your backside. Overzealous travelers indulging themselves in booze, drugs and parties might find themselves on their backsides too.

Passing through, you might have a hard time separating Amsterdam from its notorious reputation. But if you’re a local, you know that’s only a small part of the story this city has to tell. In fact, that story is being rewritten.

Over the past few years the local government has cracked down on coffee shops (aka weed shops), and have pushed the Red Light & tourists districts back – trying to avoid having these notorious areas being the first thing travelers see when they arrive at central station.

Some call it gentrification. Others applaud the efforts to promote the city’s cultural triumphs, budding hotspots, cool cafes, and culinary scene. But the fact of the matter is you simply can’t ignore this part of the city, as it is also a part of the beating heart – especially when it comes to tourism.

The thing is, no matter how contemporary the city’s people get – Amsterdam is medieval. She’s a complicated maze of straat’s and graacht’s which change names as you speed over canal bridges on your bike. Her homes are the earliest versions of skyscrapers – towering tall, and thinly above the streets, cramming as many people inside as they can fit.

Today, they lean on each other as though they’re swaying to the sound of house music carried by the wind from Leidseplein. Amsterdam wasn’t built to handle all the people who want to call her home – so if you’re lucky enough to live in the center, chances are you’re paying a golden gilder. Dutch News reporting that the average square meter price of an Amsterdam home is up 26% from 2015. Part of the problem, in part, is out of town millionaires snatching up real estate.

For the best Dutch apple pie in town, you have to head to Winkle 43 in the Jordaan. Here, you’ll find just as many locals here as you do travelers – all brought together by a slice of heavenly pie, as thick as Chicago-style pizza.

The crust has just enough structure to stay together, and just enough crumble to leave you with morsels to pick off the plate one by one – savoring every last, buttery bite. If you want to be really Dutch, forego the cappuccino and order a mint tea alongside it. The fresh, leafy sprigs in steaming water help the rich pie settle snugly in your belly. 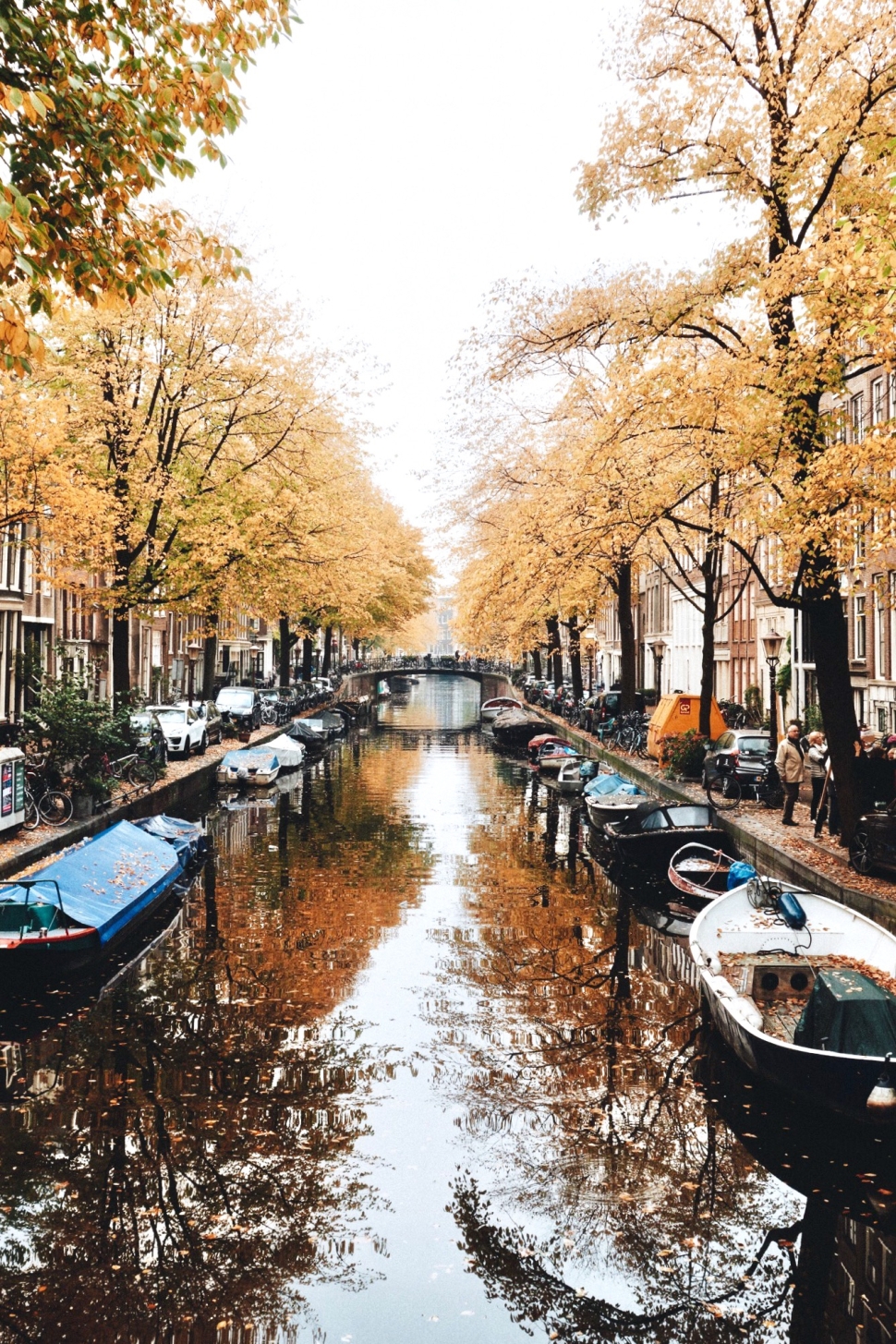 While you’re in the Jordaan you’re obligated to explore, and take countless photos of this picturesque neighborhood. Where amber leaves don’t speckle the surface of the canals, you can catch glimpses of the trees on the water like a painting. It’s on these quiet streets where you can relish in silence, sitting alongside the canal, dangling your feet and eagerly hoping a boat glides by.

Amsterdam will charm you year round, always leaving you wondering how you got dropped in the middle of a storybook. But, there’s something about the fall here that’s special.

It might be the way the orange foliage pops against the skies whether they’re Delft blue or milky white. Or the way you have to wrap yourself in a scarf as the wind skids off the canal, up and around your body. It’s the feeling of change, and being excited for it. It’s a cold beer on a cold terrace. It’s an overwhelming feeling of gezellig – a Dutch word broadly meaning cozy or inviting.

If you didn’t already meander in and out of the shops and cafes along Haarlemmerstraat before heading south, it’s worth turning back around. The street is lined in boutiques that ooze the effortless, well-dressed-but-casual looks the Dutch sport. There’s also design shops and trinket stores filled with not only things you’d buy to bring home, but items people here actually purchase and cherish in their own.

The city is filled with creatives and students – writers, filmmakers, artists, designers, and digital influencers alike. There’s a freedom in the air, and the spirit of the city that goes beyond the notorious activities aforementioned.

You can feel the ownership, the craftsmanship, the entrepreneurial spirit of Amsterdam – right here on this street. Still bustling – it feels miles away from the overcrowded streets in the direct center, lined with tourist traps proudly displaying Heineken shirts.

Everyone tells you riding a bike is the best way to get around Amsterdam, but if you’re not a confident rider, or you plan on enjoying a few beers – simply, don’t.

Whether you get there by foot or by bike, you have to make your way to Hannekes Boom – a bar on the water, overlooking the Nemo, Oosterdok, and the city. Coming up to it from the bridge it looks like a shack strewn with party lights – and really, it is. There’s no frills – but there’s a fireplace inside, and a tree swing out front. It’s as gezellig as it gets, and the locals adore it.

If you can, snag a seat outside at one of the many painted picnic tables. The ones on the back left deck have heaters – vintage ones the bartender will light with a match above your head, so watch out for sparks. Enjoy a cold beer like the young, local crowd, overlooking the water and watching as boats.

The Dutch aren’t known for their cuisine, but bitterballen are the ideal beer drinking food. They’re like a crockett, and you dip the salty goodness in spicy, seedy mustard and wash it down with your drink. They are addicting, and most definitely high in calories.

With a late afternoon, or early evening buzz the possibilities are endless. Indonesian food is a must at some point, and if you want a feel for a more elegant Dutch evening you could grab a cocktail at the equally gezellig, but definitely upscale Huxton. And if you want to party you can dance the night away at a music hall like Melkweg.

Much like the autumn, change is in the air here in Amsterdam. Rents high, there’s more tourists than ever, and there’s a real push away from the infamous vices that allure tourists. Having an authentic experience here, or anywhere, means nothing though – as each city dweller has found their own favorites and routines.

But it’s clear that to experience Amsterdam you should walk the canals, like the locals, fantasizing which home you’d like to own – at night, peaking into the golden lit rooms. You should venture outside the center. You should seek craftsmanship and creativity. And you should always be in search of the places, and moments that are gezellig.