As we landed in Cartagena, we immediately felt welcomed by the people. Their warmth and friendliness exudes from their pores. We barely noticed that we were in South America; that is until we got in our cab and realized that our cabbie spoke no English.

We thought this may just be a fluke, because after all, the whole world speaks English, right? Well not exactly…. As we got dropped off at our hotel we soon realized that the only people speaking English were us. We loved it! It added to the authenticity of our experience. Luckily, my Spanish was good enough to get us by and by the end of the first night, we didn’t even notice.

Being in Colombia, we definitely wanted to have some coffee.  But not just any coffee, we wanted what the locals had. We would see these men walking around with what looked like old school wooden toolboxes, half painted and the wood exposed underneath. On one side of the toolbox there were silver thermoses and on the other side there were candies, gum and cigarettes making it more like a walking convenient store than anything else. We saw cab drivers honking at the coffee vendors, for which they responded by going to the cab, opening the door, and serving them a cup of coffee.

It was a daily ritual amongst the people getting off from their jobs and the coffee vendors. A community. When we approached the coffee vendor named, Oyee, he was very surprised that we wanted some of his coffee; especially since we were standing in front of a Juan Valdez, (the Colombian Starbucks equivalent).

Once he realized we were serious, he graciously poured us two piping hot cups of the best coffee either one of us had ever had in our life. No cream, and no sugar. Just black, delicious coffee, it didn’t need a thing. In fact, Oyee almost laughed at us when we asked for it. These coffee condiments are very American, and not customary in authentic Colombian coffee.

Cartagena is largely a tourist town, but if you’re willing to engage with the locals or go off the beaten path just a bit, you can definitely discover much more authenticity. We visited the old town, or Old Cartagena, where there are tons of shops, street vendors, restaurants, and horse drawn carriages along the brick streets that inhabit the beautifully colored walls of once stood a town protected by a wall. 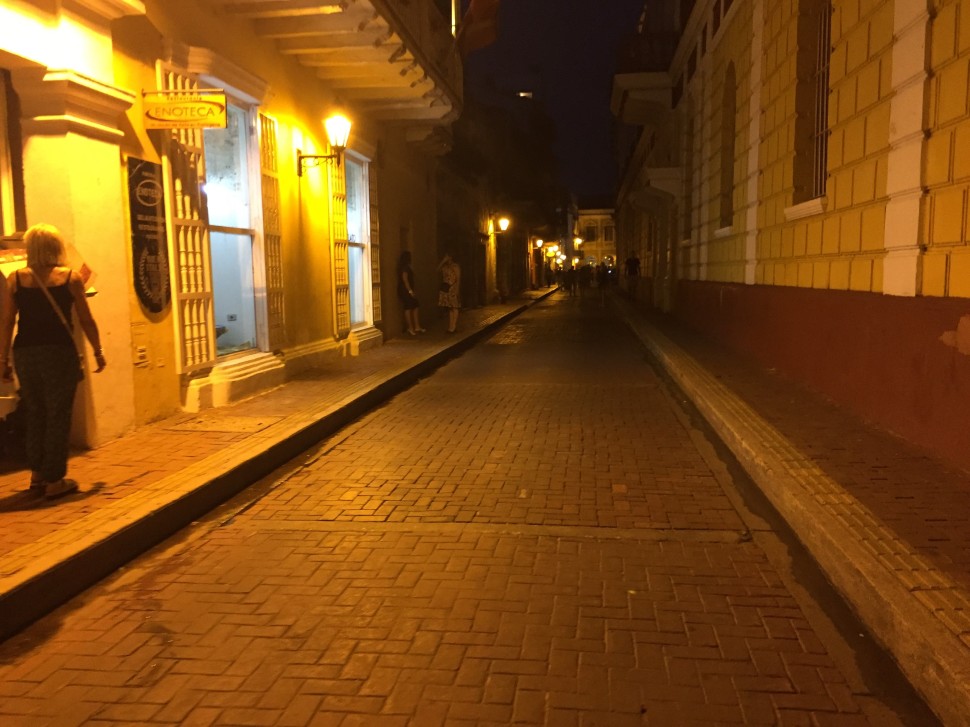 It’s on these streets that we find a cigar shop, a place for a great souvenir. In this shop, we begin to use what Spanish I know, and after a long day what little I know began to fade. The owner of the shop says to me, “don’t speak Spanish, I’ll speak English.”

For which I reply, “oh thank God.” A shot of 20 year old scotch follows and is distributed to the 4 of us in the small room filled with the aroma of cedar, tobacco leaves, and the humidity created from smoking cigars in the small room all day.

The scotch was smooth and aromatic and went perfectly with the atmosphere. The gentleman began to ask where we were from and why was my Spanish accent so good?

I politely answered, and we began to discuss what makes good tobacco and how the air in the region the tobacco is grown plays such a great part of the process of creating a fine cigar.

The men offered us another round of Scotch,  but the 10 year old version this time. They then told us how we were drinking their Scotch. Truly a unique, and one of a kind experience. They kicked us out a few minutes later because it was time to close, and well…they had other things to do.

Our next adventure in this amazingly tranquil and beautiful beach town led us to discover the meaning of farm to table, or in our case ocean to table. In the morning while we were doing our workouts on the beach, we would see the Pescadores, or fishermen, literally catching the “catch of the day”.

By noon we could select our “catch” of choice and have it grilled or fried, with coconut rice, fried plantains, salad and Limonada de Coco,  (my new favorite beverage that I have to re-create state side).

The men were so kind, that in the morning time when they were pulling in their catch, they will allow you to stand shoulder to shoulder with them if you desire to see what the catch is. I much preferred eating the catch at noon, but it made for a great memory and a delicious meal. The freshest fish I’ve ever had.